Important clients coming for lunch, food that has be taken elsewhere for neighborhood picnics, flowers from the farmer's market: everything begs to be arranged, admired, eaten. 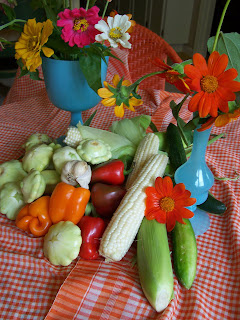 Lunch guests were promised something simple and low calorie: gazpacho the perfect solution. 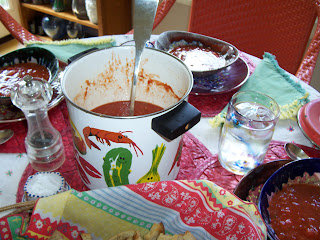 I don't really have a recipe, but just wing it with whatever is on hand, plus fresh produce from the market, plus a special addition that I gleaned from the preview party food at the Grosse Pointe Antiques Show several years ago: diced watermelon...which makes a refreshing surprise, and holds up well.
In fact, despite heavy inroads at lunch, it  lasted a good week and was easy to serve right from the enamel ware soup pot. (Made more elegant with a handsome silver ladle, a gift from a friend some years ago.) 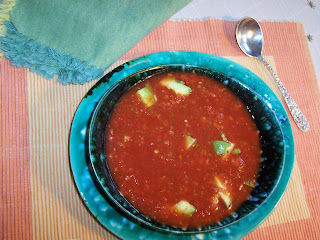 And then, on the its last day, just for me, I added diced avocado, also delicious!

Desserts also needed to be considered, in several ways: seasonal fruits, and also some of the baking which, in my catering days, was always a part of the menus. I had  almost forgotten about this luscious green grape compote, until my daughter served it as one of several small desserts at the party in July (see my blog for July 20). Again, this was a catering standby for summer parties; it's stunning done in a big glass bowl, so one can see the layering effect. Here I used individual wine goblets. It, too, keeps very well, covered and refrigerated, for at least several days. And it couldn't be simpler: green grapes,dark brown sugar, sour cream. 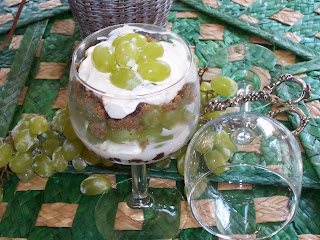 A big tray with finger sweets for a neighborhood cooperative picnic; right up my alley. It is all piled in a shallow white wicker tray, lined with foil, and then covered with an antique monogrammed white hand towel. The composition includes miniature tarts: pecan, coconut, and dried fruit, chewy brownies, cut very small (this is my mother's recipe, which I have never seen anywhere, and has NO shortening in  it!) and  fresh grapes and strawberries. 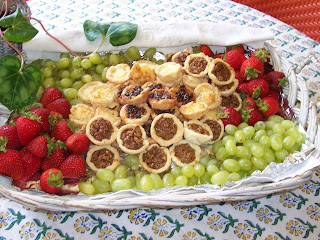 Two funny notes about this production (and it turned into quite a production): I used to have 24 of the miniature tart pans (each pan takes 12 little pastry circles), so I could turn out almost 300 of these little goodies( or miniature quiche), at a time...very efficient! When I moved, I decided I was never going to use a rolling pin again, so I gave most of the pans away, keeping four of them.  Four! What a lot of juggling went on that day! Then, when all was ready to be arranged, the day of the picnic, I made a careful composition, thinking, "I must have miscalculated, this doesn't look very fulsome". Because I had completely forgotten the brownies, which were all cut, and just waiting to be levered out of their pan. So I had to take it all apart and do it over a la the picture below.I think all dessert assortments should include something chocolate-y, and something fruit-y. 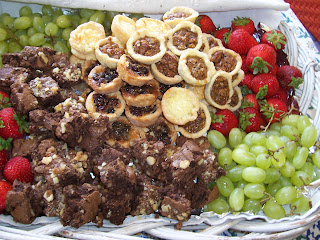 Well, we are now well into September, at least the corn and peaches are still holding their own, and no more entertaining at the moment...not until current construction in the house is done. That'll be the next blog! 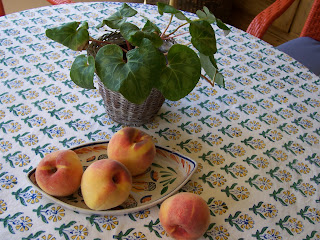 And I wish you: Bon Appetit! Happy, healthy eating.... Joan