When I moved several years ago, my children came and did yeoman duty with the packing; but it was up to me, in the new, much smaller home, to unpack and decide where things were to go.

I had already made the second bedroom into my office/showroom: took off closet doors, moved office furniture and shelving in ahead of time. 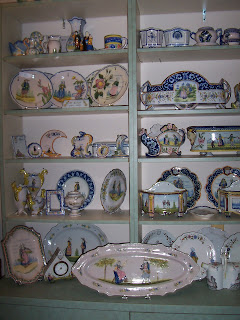 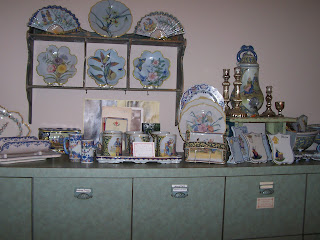 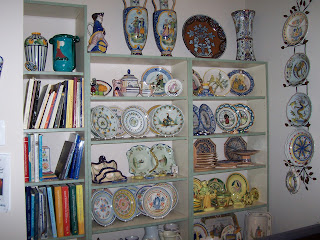 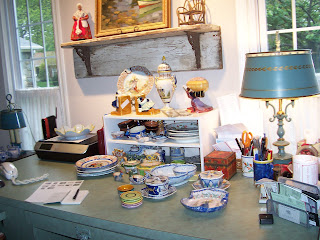 So all of the important components of MerryWalk Antiques were arranged for. But that first week, I often found myself standing in that space, some precious object in hand, and thinking,"This will go in the other room", and then realising, "THERE IS NO OTHER ROOM!" Fortunately, the two-car garage, where I had also installed shelving, took lots of the dilemmas.(We'll take a stroll through all of that later on!)

Including a big box too heavy for me to lift, that I'd been toting around for 25 years or so.Did I really want to burden myself one more time with this weight? After all, this was downsize time! But the box contained three large fragments of a Porquier Beau fireplace surround, and I had always intended either to use them myself, or sell them to a client who was adding on a room or was willing to reconfigure a wall to use them. No such event ever occurred, and here I was, one more time, with this lugubrious problem.

Well, I did indeed bring them along, and a year or so after the move, I was ready to knock out a wall and create what the French call a "jardin d'hiver". Basically, I was just enclosing the outside deck, so it was not a large addition, 10'x12', to be precise. As I planned it, I thought about the old house, and realised the only thing I truly missed was my gas log fireplace. A FIREPLACE! Yes! And a place, after all these years to use the Porquier Beau pieces. The builder liked the idea and created exactly the right framework for the tiler to make the installation.
The three large fragments: 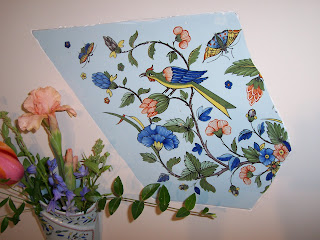 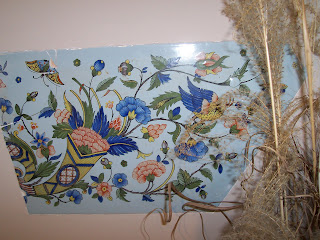 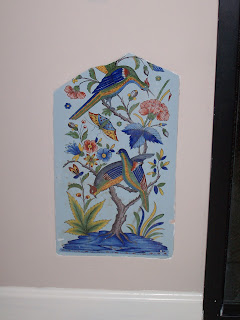 Just as I was searching through my inventory for appropriate additions...and I really didn't start out to make a  PorquierBeau/Rouen annex...I saw a gorgeous umbrella stand coming up for auction in France. I knew it wasn't of the period, but here was the pattern, which I had never seen on an umbrella stand. Had to have it! With the assistance of my French connection, Judy Datesman, we got it: it has trundled its way across France, and was actually shipped just one day before the Paris bombing last December (I was relieved that French Customs didn't think it was a bomb casing and destroy it, but no, it arrived in all its pristine glory.) 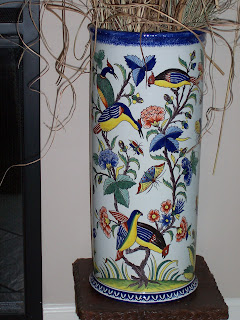 There is no mark on it; I would theorize it was a special order for someone any time from the 1950's to the 1980's. A worthy research project in its own right.

So the fireplace wall composed itself thusly: 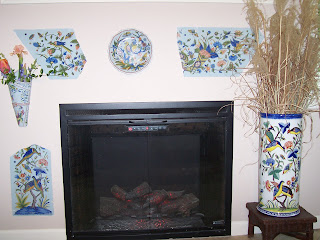 And there are other interesting plant holders. Some are good old French faience: 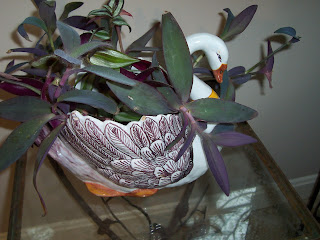 As well as a handsome set of large American jardinieres: 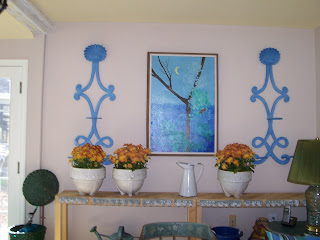 And a glorious big swan found in a local consignment shop: 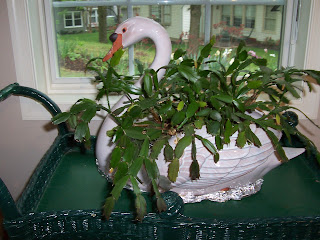 Any time of day, the light is wonderful in this room, and it has added, both literally and figuratively, an important new dimension to the house and my life here. 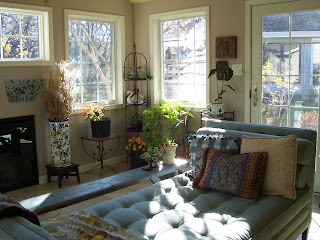 Last fall, I brought in the begonias and lots of other things; they wintered over reasonably well, but now everything has gone outside to fill out planters that have fresh blooms. Now, only an occasional flower comes in to add a touch of color to the room: 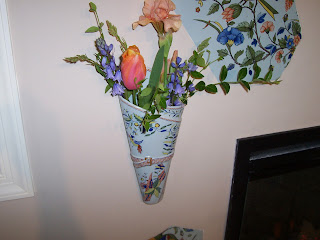 We are having a long, cool spring, so the tulips lasted well, and my magical peach-colored iris (one spray in the Porquier Beau wall pocket above) are coming out everywhere! More about those another time; it is time to do new web pages...so you'll hear from me soon again...Joan
Posted by Merry Walk at 6:45 AM 2 comments: