Join me in celebrating summer's bounty with the foods that Maryland has always been famous for. 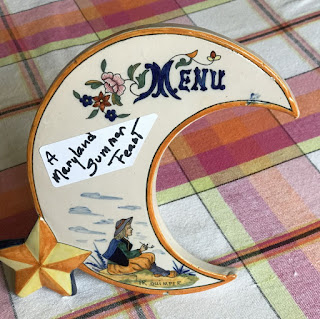 When dinner is going to be so sumptuous, I have, over the years, learned to scale back the appetizers to a modest handful. I think back on my catering days when every dinner party started with three hot hors d'oeuvres and three cold ones, and at least an hour and a half of drinking, and wonder,"How did we do it? How did anybody do it?" Well, times have certainly changed, and for the better, in terms of
healthier eating. 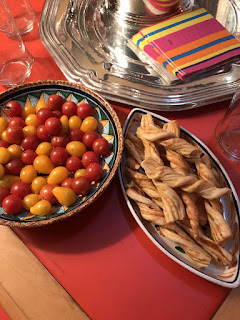 So a simple presentation of crusty cheese straws and colorful baby tomatoes from a friend's garden is just enough to start the gastric juices flowing.


Since everyone gathers in the kitchen where we eat, they can see that the table-setting looks promising. 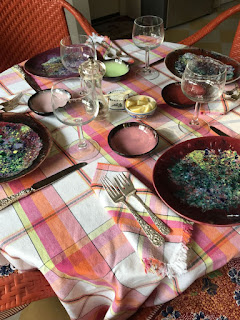 
To keep serving simple, the beans were ladled into the small dishes on the table before guests were seated, and the rest served from a sideboard, with the proviso that guests may get up and help themselves to seconds....and they did! 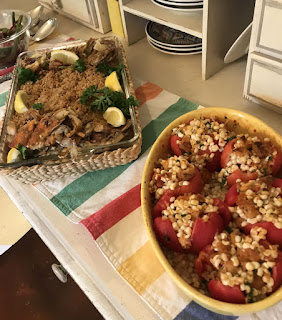 Composing this menu, I took some liberties with my family's traditional summer meals, just to make the serving simple. We would always have had corn on the cob, but that gets messy at the best of times, so I devised this simple way of doing: cut the raw corn off the cob; mix with the pulp of the tomatoes, a few bread cubes, parsley, salt, pepper, and a little butter; stuff the quartered
tomatoes; and bake around 20-25 minutes.

Rather than the usual cole slaw accompaniment, the green beans/red onions provide the same sharp contrast and are colorful and delicious. Simply layer the barely-cooked beans over very thinly-sliced onion, and dress with balsamic vinegar, olive oil, salt and pepper. Cover (that way, the beans semi-cook the onions) and let sit out until cool. This is really better at room temperature (or, as the French say: "température ambiante") than cold, so if you make it the day before, take it out of the refrig a couple of hours before serving.

Crab Imperial is my mother's recipe, modified only to be a little less rich: simply mayonaise, lemon juice and Old Bay seasoning, and buttered bread crumbs to top. Again, bake about 25 minutes.

And on to dessert! There are so many ways to use peaches, I was torn between peach upside-down cake, cobbler, shortcake or a crumble. I finally opted for the crumble. 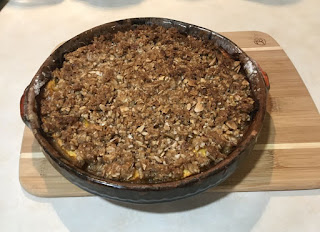 The Internet can make you crazy, with too many recipes, and three shelves of cookbooks just further confused my thinking. So I finally winged it: fresh sliced peaches, tossed with a mixture of flour/a little cornstarch/ some sugar/ a sprinkle of nutmeg. Baked, covered, in its serving dish, until tender and juices all thickened, however long that takes (about an hour.) Make the topping separately:
the same thickening mixture, plus granola and finely chopped almonds, and butter to cream it all together. Both of these steps can be done the day before. Early on party day, just using your hands, pat out the topping onto the peaches, bake until lovely and crusty. 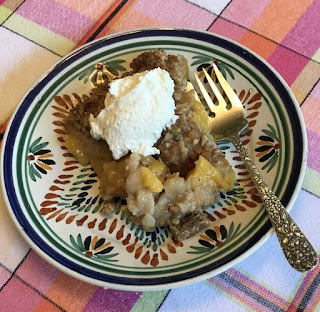 So satisfying, the day after, to have a few left-overs, a clean kitchen, and glorious flowers brought by a guest. 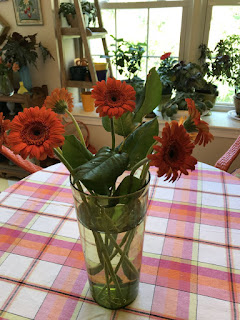 Hope your summer ends well and is full of good food and fun faïence.

Posted by Merry Walk at 7:10 AM No comments: